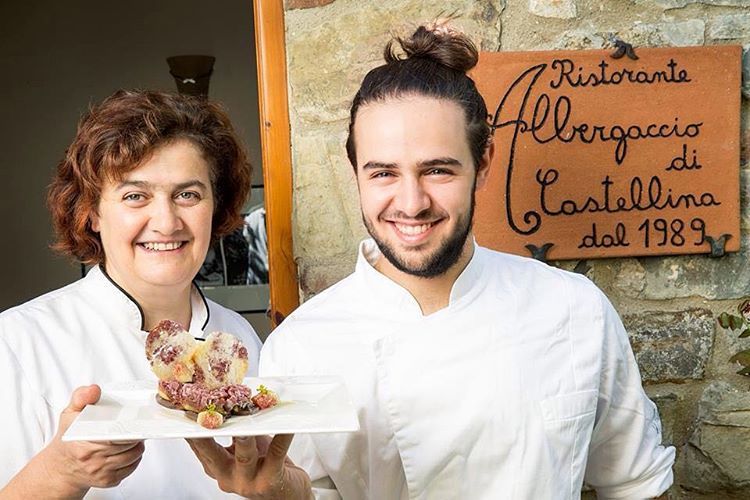 Sonia Visman has been Ristorante Albergaccio’s chef since 1989. As a historical figure of the restaurant, her savvy culinary guidance at Ristorante Albergaccio led to a Michelin star in 2003 and to the restaurant’s presence, with excellent scores, on the main national and international food and wine guides. Her professional experience, although largely linked to the territory of Chianti, includes participation in notable gastronomic events. In Switzerland, for example, at the Moevenpick premises in Bern and Locarno; in Singapore, at the most exclusive restaurants in the city and the Tanglin Club; in Kuala Lumpur and Penang in Malaysia, at restaurants and private residences; in Bratislava, at Camouflage Restaurant.

Pietro Cacciatori joins the staff of Ristorante Albergaccio in 2012, after earning his diploma for restaurant services; he also attended numerous training courses, including one on salty pastry, chaired by Diego Corsara, one on desserts, chaired by Emanuele Forcone, and that of sommelier at AIS 2nd level. On the practical side, he gained invaluable experience in London, enticing guests at some exclusive clubs of the City, and received important food and wine awards such as the Riso Gallo Prize. He proposes new creations, building upon the traditional gastronomic heritage, and personally manages the chef at home service.